How can I get my child assessed for ASD, dyspraxia or ADHD?

How can I get my child assessed for ASD, DCD or ADHD?

As dyslexia assessors we start to identify characteristics of other learning difficulties.  When we advise parents about additional learning difficulties such as autism (ASD), dyspraxia (DCD) and ADHD, we always need to be able to offer them a point of referral.  Sometimes parents tell me about the services they have found, so I was very pleased to be able to tell parents about Axia ASD Ltd.

AXIA ASD Ltd told me their assessing clinicians are also employed within the NHS too.  They spoke about special situations where parents may be able to ask their GP for an IFR (Individual Funding Request) where their own PCT may be able to offer funding for the assessment, in exceptional circumstances for pre 16 age group.  However the good news is funding is available for post 16s, adults can then access assessments if they live within a specific catchment area.

The fantastic part about AXIA ASD Ltd is they have a tour on their website of the rooms and staff, which I find is specifically useful to the young people and adults who’ll be using their services, who need to gain familiarity with the surroundings.

Dr Linda Buchan is a Consultant Clinical Psychologist who qualified in 1978. Linda has a forty-year experience within the field of Autism Spectrum Disorder; first within Learning Disability Services and for the latter part of her career within Autism/Asperger’s-specific services, before retiring from the NHS in 2008.

Axia ASD Ltd was originally formed in 1993 by Linda and her later partner, Albert. Since Linda’s retirement from the NHS, Axia has grown and evolved to its current position as an independent provider of services to the NHS and diagnostic pathway for various Clinical Commissioning Groups. For adults, Axia is the diagnostic pathway for NHS Eastern Cheshire, South Cheshire, Vale Royal and Salford. Axia recently won the tender for diagnostic services of Autism Spectrum Disorder in North Wales Child and Adolescent Services. Axia also accepts private healthcare and self-referrals for the diagnosis of Autism Spectrum Disorder, Dyspraxia/Developmental Coordination Difficulties and Attention Deficit Hyperactivity Disorder.

Axia is proud of its experienced and diverse Multidisciplinary Team. The diagnostic and post-diagnostic support team includes professionals in Clinical Psychology, Speech and Language Therapy, Systemic Family Therapy, Mental Health Nursing and prestigious trainers, researchers and authors in the field of Autism. There are a wide range of special interests amongst the team including the female presentation of Autism, catatonia, interpersonal/relational challenges, and issues around education and employment. Further, Axia has highly skilled administrative support, IT/media support, a Clinical Support Worker, and self-professed ‘Nerd Consultants’. ‘Nerd Consultants’ support the understanding of, and engagement in, special interests such as film, TV, gaming, Anime and Manga amongst the team and with those accessing the service.

Axia ASD Ltd prides itself on its neurodiversity, having people with Autism, Dyspraxia, Dyslexia and Irlen’s Syndrome amongst its staff team. This speaks to Axia’s firm belief in, and endorsement of, the skills and strengths that exist as part of neurodiversity. Linda herself has written a book entitled, “Memoirs of a Dyspraxic Diagnostician”. 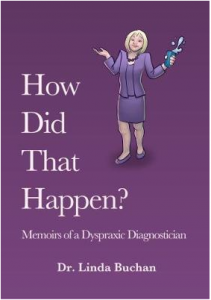 Diary of a Dyspraxic Diagnostician

From its small beginnings to today, Axia has diagnosed thousands of individuals with Autism. Brief individualised post-diagnostic support is available for those receiving diagnoses at Axia, as well as a rolling post-diagnostic support group for adults. Individuals may also access (self-funded and NHS-funded options) complex psychological/psychotherapeutic interventions where appropriate. All interventions are tailored specifically to the needs and preferences of the individual/family, and adapted to suit their strengths and challenges.

The team at Axia work on a strengths-based model of Autism and neurodiversity. That is, recognising the skills and potential of individuals they meet, while addressing barriers to thriving. Axia always works in partnership with individuals, providing a non-judgemental, empathic and collaborative understanding of the different manifestations of neurodiversity such as Autism.

Axia is committed to increasing broader awareness and education in the field of Autism, for example in sponsoring, presenting at, and providing conferences. In addition, Axia can support training/placements in the healthcare professions, for example in Clinical Psychology training. Axia recognises the value of social and mass media, readily engaging at these levels to promote awareness and education around neurodiversity.

I found AXIA ASD Ltd very personable during our chat, I felt very much at ease asking questions.  If you’d like to know more click here  or call/email 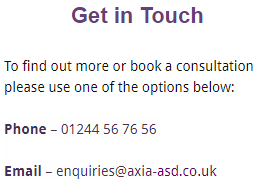