What is good intervention, why does phonics not work?

Quite often I get asked, why is Codebreakers more than just phonics? What is the difference between phonics and a systematic synthetic phonics programme? Too often I hear, phonics doesn’t work.

Phonics interventions and teaching phonics usually relates to the 44 sounds we find in the English language. These are made up from the 26 letters of the alphabet.  I recall my very early days training when our university tutor asked how many letters versus how many sounds were in a word. I have to say, I was pretty confused myself in those early days.  Getting our heads around the lingo relating reading and spelling can be tricky.  As Dyslexia specialists, we need to be able to describe information to fellow professionals and at the same time keep in mind that those delivering interventions usually have not been trained in all the key terminology and parents especially are confused by technical descriptions.

First of all we know there are 26 letters in the alphabet and we label them with their names “a, b, c…etc”.  If we think of some examples of words this helps to understand the difference between letter names and sounds.

‘spit’ has has 4 letters and we can chunk the ‘sp’ to make a blend (two letters making their own sounds). It makes it much easier on the working memory to hold the sound ‘sp’ as there is less to remember when blending. So we can say it has 3/4 sounds depending on whether you count ‘sp’ as one sound.

We can also think of words in syllables not just sounds or letters.  Syllables for me means the beats in a word. If we say the word naturally how many beats can you hear. Not everyone can hear the beats, they feel confused when people start to clap the ‘beats’ and will often start to randomly segment words and sometimes confuse syllables/beats with sounds. I find placing the hand gently under the chin and saying the word naturally helps people to ‘feel’ the beat, by how many times the jaw moves.

Think of the word ‘catapult’, this has 3 syllables/beats, ‘cat-a-pult’ .  We can break larger words down into syllables to make smaller words, making it easier to spell those smaller words.

Phonics is about teaching the smallest units of sounds, these are called phonemes. Individuals then make the connection between the sound/phoneme and the written text, the letters or what are technically called ‘graphemes’. We’ll often discuss the person’s ‘grapheme response’, this simply means what have they written when spelling a word.

Synthetic phonics shows individuals how to match the spoken sound with the letters which are written in text to be able to spell or read a word. The labelling and blending of the letters is to synthesise, hence synthetic phonics.   This means an individual can decode (breakdown words easily to blend and read), at the same time, they can also reverse the system to encode (spell words). This means they can sound out and make a written representation or grapheme response for each sound they hear.  Teaching the various ways to make a sound means individuals are not limited to a set of words they have learned to spell.  For example we can teach at least 3 ways to make the sound long vowel /a/; ‘a-e (made), ai (rain) or ay (play). We can the teach rules to help inform which choices to make when hearing the LV /a/ sound.  Once an individual is exposed to a number of sounds and patterns, they can then read and spell 100s of words.  This is a very different system to teaching whole word recognition or cues from initial letters when reading. Frequently, Look, Say , Cover methods are used for spelling, although this is often recalling what the word looks like, which is inevitably forgotten. However, teaching a person to sound out and make a written response for each sound can be effective and opens up potential to spell many more words which include those sounds.  Over my years of teaching, I’ve also discovered that once individuals start to respond to a synthetic phonics methods, words become less daunting to read and spell. They almost unlock the code and when the majority of the word becomes easier to encode or decode, the rest of the word becomes less challenging. They can then use those vocabulary and contextual clues from the sentence to complete the word when reading.  Usually, the hard part is progressing a student to this method , rather than the default method of reading and spelling by recalling what a word looks like.

The whole word recognition system is referred to as analytical phonics, where we often read with children and they recall words by sight. Later on readers will perhaps break the words down into sounds. The system is almost taught in reverse.  Teaching is not explicit but often implied.  Exposure to sounds and patterns is incidental rather than planned.  With a synthetic phonics approach, the sound is taught directly and the words are built around those sounds, transferring the knowledge to many other words to read and spell.  The rules related to the sounds and patterns might also not be identified.  I often recall a student spelling ‘joke’ as ‘jowke’. They had clearly not understood that ‘ow’ could make the same sound as ‘o-e’, we don’t need both to make a LV /o/ sound.  Many of us won’t really remember how we learned to read. Some will argue that we shouldn’t teach phonics in a synthetic method.  That reading should be for pleasure and based on language and understanding.  I quite agree.  However, if an individual can’t retain a whole word and read by sight, they can’t access the written word, they will gain no pleasure and understanding and this will not contribute to their vocabulary and language development.

A systematic, structured synthetic phonics programme, such as CodeBreakers, means that learners follow a very specifically devised programme where they are explicitly exposed to a sequence of sounds and their pattern of letters, it also describes any ‘rules’ for their use, such as ‘ai’ mid word and ‘ay’ end of word.   Usually, this will be a graduated programme, based on complexity of sound.  CodeBreakers is also a cumulative programme, meaning learners will only ever be asked to read and spell words with sounds they have been introduced to, this quickly builds confidence.  Learners are then exposed to a wide variety of games and worksheets which will focus purely on the sound and related patterns.  Learners will then practice the sound through lots of over learning opportunities, to ensure the sound and ability to encode and decode at single word and sentence level is competent.

During each of the workbook activities, learners will develop phonological and phonemic skills.  Phonological skills are the ability to rhyme, identify the first, mid and end sounds and count the syllables/beats in words.  Phonemic skills will develop the ability to orally blend words and break into sounds. More advanced phonemic skills are those where individuals can delete and replace sounds in words, such as ‘hop’, replacing ‘h’ with ‘t’ makes ‘top’  or the word ‘spine’ removing ‘e’ makes with word say ‘spin’.

CodeBreakers is one of the only Dyslexia reading and spelling boosting programmes which can be taught at home or school.  It has been trialled in some schools in the UK with excellent results.  It is quite unique, as it is also appealing to older learners too.  Our oldest learner is in fact 66 years old! Yes that’s not a typing error! He is 66.  We recently worked on on the Channel 4 programme The Write Offs demonstrating that any age can develop reading and spelling skills.

See our latest offers with over 50% discount HERE 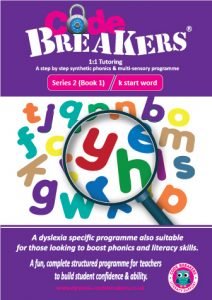