How playing video games may be related to cognitive benefits and improved reading for children with dyslexia – Shhh don’t tell the children!

How playing video games may be related to cognitive benefits and improved reading for children with dyslexia – Shhh don’t tell the children!

Here at CodeBreakers, I recently developed a whole series of online games to help develop reading and spelling. They follow the systematic synthetic phonics programme and workbooks which are also available from Codebreakers. I was a little cautious about developing gaming as an intervention tool, as it often receives such a bad press.  However, in some training which I recently attended, I also learned that learning through games can also develop skills far quicker than workbooks alone. When I heard about Hannah Lewis’ research project I was naturally very intrigued to find out what it was all about and if gaming really can develop skills to help those with dyslexia.

Recently, I was having a conversation with a parent about video games. Their child was an avid gamer and demonstrated a love for gaming that is shared by many in the 21st century. We started discussing how frequently their child liked to play on their games console. It was obvious that this topic made the parent uncomfortable, they were seemingly embarrassed about how often their child played (despite this not being out of the average for a child of their age). This may be unsurprising to you, particularly if you are a parent, you may even feel the same way. Playing video games, or playing them “too much”, often has a negative association.

In the media, video games have been blamed for rising levels of obesity in children, for creating anti-social children and certain games, particularly those from the action genre, have been said to create violent and aggressive teens (see Jones et al, 2014 for examples of these news headlines and why the opposite is actually more likely). Parents are also told by the media to worry about their child becoming addicted to video games and are warned of the consequences, such as development of a gaming disorder (eg. See recent guardian article; Thomas, 2021). In addition to this, we are constantly cautioned about screen time generally, and we are told about the consequences of spending too much time in front of screens (eg. Morin, 2020). Although what constitutes ‘too much’ is often disputed. It is unsurprising, therefore, that many adults hold a negative perception of video games. However, it is also evident that children in the 21st century spend their free time differently to how previous generations did. While this may seem a world away from the outdoor childhood fondly remembered by many, is this change necessarily as harmful as it has been portrayed to be? 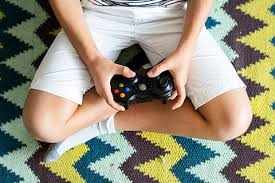 Coming back to the conversation with the parent I mentioned initially, the embarrassment they clearly felt around their child’s gaming habits surprised me. As a researcher who spends a significant amount of time engaging with literature that explores the benefits of video game play, I had somewhat forgotten about the social stigma and the negative perception of video games held by many. In my opinion, there is such thing as too much video game exposure and I do not dispute the concerns raised in the media about addiction and screen time. I am a firm believer of ‘everything in moderation’, however, I don’t think the other side of the coin – the potential benefits of video game play – are discussed enough.

The other side of the coin

Video games provide an immersive experience, often allowing the player to escape the real world. This experience can create an engaging environment in which several skills can be developed. On the contrary to the concerns raise above, some games have a multiplayer aspect allowing the gamer to play and chat with friends or others with similar interests, this has been found to help develop social skills (Jones et al, 2014). Additionally, playing video games may also inadvertently aid the development of motors skills and may even encourage physical activity (Campos and Fernández, 2016). Newer games using virtual reality technology may be particularly beneficial in doing this.

When we look deeper into the effects of game play, significant changes can be seen at the neurological and cognitive levels. Daphne Bavelier, a French Neuroscientist, along with her colleagues have extensively explored the potential benefits of one genre of games: action video games (AVGs). AVGs are fast paced games that require a high level of processing, putting emphasis on the players hand eye coordination and reaction times. AVGs are commonly associated with shooter games, such as Call of Duty or Fortnite, but games in the AVG genre extend beyond this. The cognitive skills found to improve after playing AVGs include improved ability to multitask/switch attention between tasks, improved perception (ability to process information received by the senses), improved allocation of attentional resources, enhanced spatial cognition (ability to process and manipulate information about the location of an object in one’s environment), verbal cognition and improved ability to exclude irrelevant stimuli (Bediou et al, 2018). For those with weakness in areas of cognition, video game play may be particularly helpful.

How is this relevant for individuals with dyslexia?

Children with dyslexia have been hypothesised to have weakness across a number of cognitive skills, the most discussed is impaired phonological awareness. However, it has also been recognised that individuals with dyslexia have weaker attentional skills than their typically developing peers, and it has been suggested that this weakness hinders reading abilities due to the role of attention in reading (Franceschini et al, 2013).

When reading we use attention in a number of ways. For example, attention must be allocated to specific letters/words presented in the visual field, this must be done whilst filtering out irrelevant information. Attention also plays a role in letter discrimination and therefore, reading accuracy. Reading fluency on the other hand, requires attention to be shifted between focused and distributed states to receive detailed information about text whilst planning where attention should be directed in the next eye movement. There are many different theories, however, it is suggested that some individuals with dyslexia may attend to less information in fixations and shifting attention at a slower rate, making reading a more difficult task (Franceschini et al, 2017).

As previous research had shown AVGs to improve attentional abilities and individuals with dyslexia to have impaired attentional performance, Franceschini et al (2013) explored the possibility of AVGs improving attention and subsequently reading of children with dyslexia. They recruited children in Italy, who were aged between 7 and 11 to play 12 hours of an age appropriate AVG – Rayman’s Raving Rabbids. They compared results with a control group who played non AVGs. Only those in the AVG group showed improvements. They demonstrated improved attentional performance after game play and also showed related reading improvements.

“We found that only playing action video games improved children’s reading speed, without any cost in accuracy, more so than 1 year of spontaneous reading development and more than or equal to highly demanding traditional reading treatments.”

Franceschini and their colleagues have continued to build on this research in subsequent publications, further developing these findings and exploring them in other countries with different languages Eg. Australia (Franceschini et al, 2017). This research is still an emerging area. Although findings have generally been positive, more research is needed to determine the generalisability, validity and reliability of findings.

As mentioned, the research published on the effects of AVG for children with dyslexia is still emerging and more research is needed. As part of my PhD research, I am replicating Franceschini’s research for the first time in the UK. I have added additional elements to further our understanding into the effects of AVG on reading but to also explore children’s perceptions of these games and how they can be best designed to ensure they are engaging and fun. If you have a child formally diagnosed with dyslexia aged between 7 and 11 who would like to participate in this study, I am currently recruiting for this. You can find more details in the section below.  If you are an educational practitioner (or anyone else!) in contact with parents of children who may be eligible to participate in this study (see eligibility criteria below), you can use the information below to share details of my study.

To participate in the aforementioned study, your child must be aged between 7 and 11 with a formal diagnosis of dyslexia. It is also asked that they meet the following;

-If your child has a diagnosis of dyspraxia, dyscalculia, ADHD, visual stress, or any other specific learning difficulty they will not be eligible to participate

-If your child has a history of a psychiatric or neurological disorder, they will not be eligible to participate

If you are unsure as to whether your child meets the inclusion criteria, please do not hesitate to contact me (hmlewis@cardiffmet.ac.uk).

The research will take place face to face, over a 7-week period. I can travel within England and Wales to deliver these sessions, however, the logistics of this may need to be considered. This will be reviewed on a case-by-case basis.

If you are a parent/guardian and would like your child to participate in this research, please fill out this form https://cardiffmet.eu.qualtrics.com/jfe/form/SV_b3dTJdUnGbpIjVs.  More information about the study can also be found by using this link. Any questions about my research or this blog post more generally can be directed to HMLewis@cardifmet.ac.uk

www.facebook.com/127282580743978/posts/2287404401398441/We know how difficult it can be to get accessible specialist advice without it costing you an arm & a leg. We are therefore offering FREE consultation sessions with Ken & Rachel, our Independent SEND Advocates. Our FREE sessions run from 7pm-9pm on the following dates:September 15th and 22ndOctober 6th, 13th, and 20thBook your FREE consultation here: talking-sense.org/advice/ ... See MoreSee Less

www.facebook.com/127282580743978/posts/2287199844752230/The law requires EHC plans to include all your child's needs and to specify & quantify provision required to meet those needs. All too often though, EHC plans contain words such as "access to" "regular" "will benefit from" "if needed" which can make the EHC plan unenforceable and quite frankly not worth the paper it's printed on. Our EHCP Check service allows us to review your child's Draft, Final, or Final Amended EHC plan and advise you on the content so that you can ensure it meets what is legally required to secure your child's special educational provision.If you want us to check your child's EHC plan, email us at: enquiries@talking-sense.org ... See MoreSee Less

It's so important to find relaxation time ... See MoreSee Less

Are you the mum of a child with a disability, diagnosis, or additional needs? Click here to join this amazing community! www.facebook.com/groups/sendginandcheese/(Please note - you must answer the membership questions to be approved into the group) ... See MoreSee Less